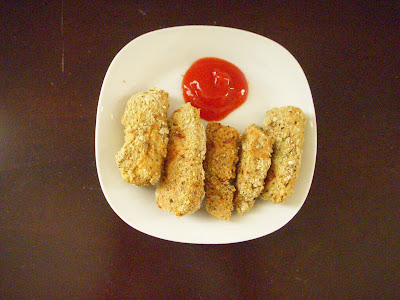 Finger fish or fish fingers are the Indian take on fish sticks and these are much spicier than fish sticks. I learnt this recipe from my co-sister. This is a favorite at my in-law’s place. When the whole family get-together, there will be finger fish in the menu for lunch that day. We (my MIL, co-sister, and I) usually prepare an elaborate lunch mostly consisting of many varieties of seafood or non-vegetarian dishes and also some vegetarian dishes for my hubby. It is fun when we talk all sorts of stories, sharing laughter, and cook together. In US, I prepare them rarely since I cook only for me and mostly I go for something quick and easy when preparing nonveg. Recently an Giada De Laurentis (I just love the way she talks and cooks…everything about her is very bright!) show got my attention where she prepared baked fish sticks with salmon. I think she even added some parmesan cheese. I wanted to try that for quite sometime, so I came up with my own fish sticks version here. Here I used salmon instead of the regular king fish used in . I have followed my co-sister’s recipe here except that I have also substituted half of the bread crumbs with oats flour and threw in some dried herbs and seasonings into the bread crumbs. Again crazy-me went ahead and baked half of the fish sticks and shallow-fried the remaining half. Both the versions were good, though the baked fish took a little bit longer to crisp and they were not as brown as the fried one though the taste of both versions were similar. The fish sticks included in this post are the baked ones.

1. Fish fingers, around 10. I cut from 3 medium-size salmon fillets.

7. Any type of seasoning mixture like Italian and any fish seasoning, 1/2 tablespoon.

8. Any mixture of dried herbs, 1 teaspoon.

Clean the fish and cut into even thin fingers. Add the chili powder, turmeric powder, and salt and let them marinade for around half an hour. Mix the seasonings, dried herbs, salt, bread crumbs, and oats flour in a plate. Take the corn flour in a bowl, add a pinch of salt and some water, and mix it into a smooth paste. To fry the fish, heat a shallow pan with around ½ cup of oil. Take the fish fingers and dip them into the corn flour batter. Then coat them with the bread crumbs mixtures and shallow fry the fish until they turn golden brown on each side. Cooking around 4-5 fish fingers at a time is ideal. To cook the fish in the oven, arrange the fish fingers on a greased baking sheet leaving sufficient space in between and bake them at 350 degrees for 20-25 minutes. Serve hot finger fish with your favorite sauce.

Variation: For a much spicier version, a teaspoon of chili powder can be added in the corn flour batter.

Email ThisBlogThis!Share to TwitterShare to FacebookShare to Pinterest
Gita Jaishankar
Cooking and trying out new recipes is my passion. I come from a family with where type 2 diabetes is very common and we have lost many loved one due to complications of this disease. This blog is my humble attempt to create low-carb and healthy dishes and well as healthy lifestyle tips suitable for diabetics. This blog is to prove that healthy, primarily diabetic-friendly foods, can be tasty as well. Kuhapriyai @ Gita

My MIL makes this often too. Never tried baking it though...
Looks awesome...

Oooh, I love the idea of spicy fish sticks! These sound wonderful, Gita!!

Delicious starter and nice idea of baking it too...healthy as well

crispy fish sticks..can i have some:)

Healthy and yummy fish sticks, thanks for sharing Gita....

My hubby's fav ...loved the Desi spicy version :-)Regds to your co-sis ! Hope you had a wonderful V day :-)

Gulmohar, one moment I thought u gave regards to Gita's sister. Got really excited, then say the co sis.

Thanks for sharing such a healthy, tasty and crispy snack.

Love the spicy version of fish sticks, looks prefect for me..

I would love to grab some now, perfectly crunchy outside!

Nice to read about your family dinners and cooking style dear. Love the alterations you made. Totally a healthy and delicious fish recipe. Want to try it for a snack soon:)

Wow just had this fish sticks in beijing bites restaurant last night and was thinking i should learn how to make it.you cant get anything better than this baked,indianised and yummy recipe.Will try it out soon dear..

I like fish fingers as well, crispy and nice for this cold weather.

I am a fish lover of all kinds. I haven't tried mine fried in almond flour, but I've used dried coconut and fried it up in coconut oil. Yum! I also made "popcorn shrimp" that way.

Gita Jaishankar
Rancho Cuacomonga, California, United States
Cooking and trying out new recipes is my passion. I come from a family with where type 2 diabetes is very common and we have lost many loved one due to complications of this disease. This blog is my humble attempt to create low-carb and healthy dishes and well as healthy lifestyle tips suitable for diabetics. This blog is to prove that healthy, primarily diabetic-friendly foods, can be tasty as well. Kuhapriyai @ Gita